This is a project I completed in the summer of  1998, on holiday in the Carpathians, before I was due to start high school. I really liked the message of the book, written by Victor Hugo and published in 1831 – a message of inner beauty; social injustice being camouflaged by political or religious powers; but also a manifesto on restoring the architectural legacy of the Goths (a new concept at that time, alongside the creation of nature parks and reserves).

However, the strongest pull towards illustrating this story was wanting to draw the outfits, Esmeralda’s clothes. This was my own manifesto on preserving details of fashion history as a more important source of information than the chronology of wars. Also, this project represented my “instant gratification” away from school worries. I was quite the procrastinator, and still am – except I used to believe the Blue Fairy, whereas now I trust Candlewick’s wisdom and innocence… But that’s another story!

After all this time, to my surprise, I find out that Victor Hugo himself procrastinated endlessly before finally receiving an ultimatum from his publisher to finish the book in six months – to which he stepped up, devising to lock all his clothes away and prevent himself from socializing. Less distractions, more writing. So while illustrating his book, I was procrastinating, as well as drawing clothes, to relate to the story that came out of his mind while he had given up those very things? Fascinating! There is also a rumour about him keeping only one shawl to wrap himself and avoid shocking his housekeeper, but no-one really believes it? Take a look below, if you don’t…

First in line, some different character designs I dug up in the fandom (and it seems I only scratched the surface, there are many more out there): my own version “direct and unmediated, from the book” (this is an important aspect, linking into a reader’s own archetypal landscape), then a French production, the Disney version, an Italian production, the illustration from the library book I borrowed here in Romania, and Noa’s video Vivre which I stalked during every music show on TV. (Later on, an artist who identifies as lesbian was inspired by the lyrics of Noa’s video I posted next to my drawing, and made her own version of the scene with the colums. So how many layers are there now, from the beginning to her version? Amazing… Victor Hugo’s story has a special kind of magic.) 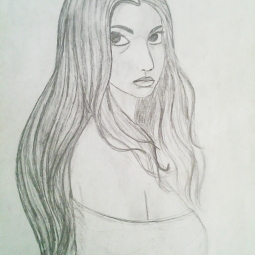 Here is the first version I drew of selected scenes (and the shawl): 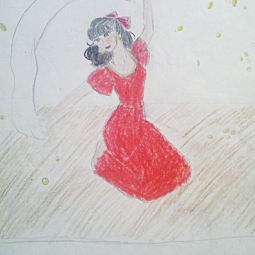 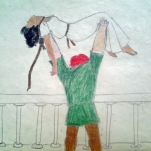 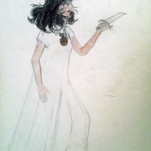 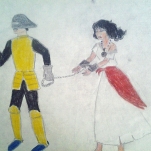 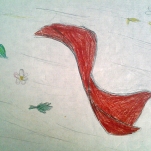 Here is the second version, where I wrote the exact quotes I was referring to: 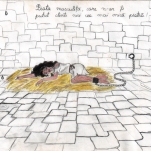 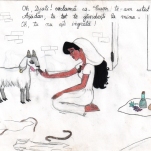 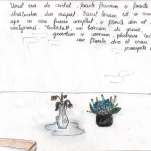 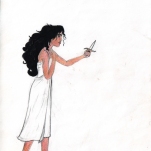 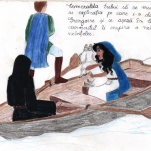 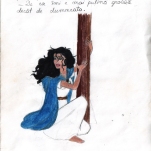 I practised my drawing skills some more by drawing Disney’s version – then compared the different endings and what they could each mean for the overall message. Mind you, our VCR didn’t have an Image Pause function, so I just watched the film a lot of times until I got all the details I needed (and learned the songs… I could still sing you God Help The Outcasts right now if you asked me to). 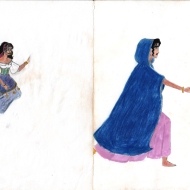 One day I chose the Hunchback tape for a “positively challenging movie day” assignment at the high school where I was routinely bullied by classmates and by members of the teaching staff alike (they hate tomboys because of how we speak up) – but the teacher said the dialogue was above the level of English understood by the class, so next time please bring something more appropriate to their level. Right! I’ll let you debate the wisdom of such politics, if there’s any. Anyway, I fared better a bit further away, oh like Japan! They didn’t understand English there either but, somehow, in that context it wasn’t a problem. I used my drawing to create cultural bridges, and the timing made it so that Gypsy Esmeralda became that bridge.

And finally, in August 2012, I got to explore the architectural legacy which had until then been only an idea in a book of fiction. Most people skip these descriptions because the action is more appealing, and I was no exception there. Because I hadn’t found the key yet: “I think, therefore I am… a beastie myself!”