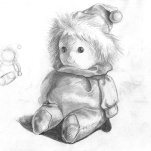 In Romanian, the closest language to everyday Latin, we have the words ‘alb’ (white), ‘apa’ (water), ‘albie’ (riverbed), and ‘hali’ (eating in a rush), which is very interesting in relation to the above cited paper. Cucuteni Culture from the Neolithic pre-dates Sumerian settlements by at least 600 years, with pottery that introduces a distinct wave-like symbol which became known as an iconic Greek design. This Greek design was spotted in China and became the basis for the theory that Chinese and Greek cultures must have interacted in the ancient world.

By extension, ancient place-names like Alba can explain more about the identity of the mysterious “Alfar,” “Elves,” “Apkallu,” etc. – the initiates of old making various appearances in Irish monastic texts, likewise accompanied by distinct spiral symbolism. The assumption that their name means “white” stems from the idea that a singular “Proto-Indo-European language” must have existed (it is only a theoretical reconstruction); but by utilizing Cacciafoco’s linguistic study, I can glimpse their identity is actually linked with water, fluidity, phasing (transitioning), clouds, and “shades of grey.” And this water symbol is in reference to a Serpent, by means of the sinuous waves. “The Serpents” was also a name by which initiates were known; they were driven to hide in the depths of uncharted forests and eventually disappear from Ireland – a feat celebrated by religious elites as “a victory over evil.” Yet in a few of those texts, there is questioning as to the true nature of the Alfar. The monks reason it out, concluding that these beings are (in no uncertain terms) of both heaven and hell, but that their knowledge can only come from heaven, as heaven is what their knowledge creates. In other words, they are the people of the knowledge, which comes from heaven, through the Serpent. As for their appearance, it is that of the human.

The nature of this knowledge (nourishment for the soul) is something I found myself debating with many apparent initiates in recent times, which wasn’t a lot of fun. Then I remembered reading that some of the Alfar had fallen to the illusions of duality, distorted the knowledge, and taken most of Mankind along for the ride. Well, that explains it. I’ve always felt different in this humancentric society, but be that as it may, I never resonated with the more shut-off esoteric circles who claim human nature is defective – while at the same time I’m always laughing at those who claim esoteric knowledge is evil. Such claims only serve to keep others ignorant and fearful of a miraculous legacy that is inside us all. What is really fun, though, is discovering the ancient legacy encoded in cities that I visit: architecture, sculptures, random associations of objects in shop windows, and other design details which the artist has placed there to communicate information. In creating this series, I was also inspired by Aya Kato’s digital art series dedicated to different cities – where each city-entity appears as an allegorical woman, dressed up for a special occasion.

1. One Thousand and One Nights. Charcoal. An unknown city lost to the desert, described in medieval times as containing miracles and wonders such as ghostly images inviting you to discover the city, and metal horses that could be unlocked with a key and take you flying towards the sun.

2. The Rain Curtain. Pastels. The statue of Freddie Mercury in Montreux, overlooking the water. In monumental art, freezing an action into stillness is called “the working soul.” The name Alps is in reference to the white-capped mountains, but according to an online documentary to do with career paths and the overall mental switch that happened at the end of the last millennium towards more ecological enterprises, it is the dwellings of the Alfar that are supposed to be remembered through the name.

3. Broken Toy. Pencil. Toy shops are usually a magical feature of every city, one of those things that take me back to fairy tales about Dwarves and their crafty skills. However, this time I explored the feeling of guilt that arises in childhood when we break a toy. It feels as though we have broken someone’s trust in us. Interesting thoughts on absolute passivity arise from this.

4. Amor contemplative (Vasticana). Ink on paper. A drawing of Michelangelo’s Pietà at the Vatican. The character Mother Mary was based by different writers around the personality of the Virgin Mary Magdalene, a follower of Jesus. The term “mother” refers to an ancient tradition for queer people such as Michelangelo, while “virgin” translates as “masculine.” Contrary to modern beliefs, nothing actually happened between Jesus and Mary Magdalene that fits our ideas of a relationship or marriage, though it would (in another world) fit the Greek idea of your “life coach” being your lover, which applied only among men. She had been shamed by her peers for being very strange, acting like a man, so because of this she wanted a material family of her own – to prove her bullies wrong. However, Jesus explained (using unconventional methods) that not all people require one, for example he himself was without a material family; his explanations about the spirit are what the Holy Grail myth is about. After his passing, she lived the rest of her life as an artist, depicted by later artists as “in touch with the spirit world.” This doesn’t necessarily mean that she never had any children; but the point is that the mythology surrounding “a special Grail family born of a virgin” is much older, not something that was hidden about the life of Jesus to preserve his (intriguingly self-made) status of supernatural virgin-born god (!). The stories of the Flood, the Ark, the Rainbow Contract, and the Garden of Eden are but one single event, which makes it interesting as this special family would be associated with water (the Serpent) as their element, raining down from the skies. Their existence is tied to the Gnostic revelation (“the true source of the light inside Adam’s body”), so the question which has stumped schools of philosophy throughout history is whether the People of the Water were born as a result of ignorance, or awareness.

5. The Road to Atlantis. Photograph. A shop window in Budapest, Hungary.