This concludes my weekend break in Galaţi: a piece from 1976, aptly titled Evolution. It’s a stylish torus, one of the many permanent sculptures along the Danube Promenade. 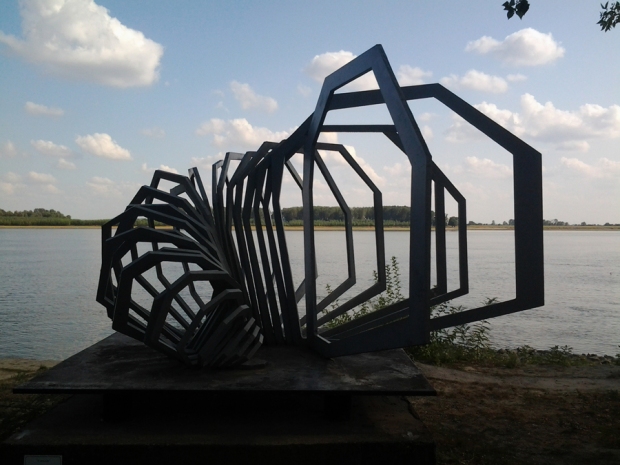 When I first visited Galaţi this past June with a friend, we landed directly into the dehumanizing, failed Communist ghettos. Instead of a name, they have a number. And there are quite a few more, serious reasons why locals write (in good humour) that their city sucks. Their honest take was the first positive aspect. But now that I’ve revisited the city for a more in-depth look, I find it’s really not all that horrible: Galaţi has a vibrant art scene, a botanical garden unique in all of Romania, and an impressive promenade along the Danube river (the ancient lands of Dobrogea begin on the opposite bank).

The “evolution” part of my statement refers to what I have learned from this travel: it’s not something new, but something I see with new eyes. In Romania the Ministry of Culture is the same body as the Ministry of Cults (religions) – so if you want to be anybody on the art scene, you have to promote patriarchal concepts or “values” (it also means that the Church is now appropriating old buildings which used to belong to cultural organizations, replacing the trained guides with their own speakers of theological nonsense). Are you joking? I could not, and will never, do this. I always gravitated towards Fantasy and similar genres, which I was told were worthless. I used to feel that, in spite of my passion for art while growing up, I had no talent whatsoever because I simply could not fit into this art world as I knew it.  Something then closed in me, and I didn’t want to be part of the art scene any longer, for a long while. And I couldn’t explain this conflict I felt to institutions abroad, either, but I am grateful that a couple of tutors in New Zealand did manage to snap me out of my shell.
I don’t think they did it consciously, but now I can see in retrospect, for example, why every Romanian student always name-dropped their former tutor, in a way that transcended the practical requirements of school administration  – a bit more like their own personal Muse. It’s not that I don’t respect when someone gives you the tools to grow, but the institutionalized relationship creates confusion about your true Muse. Like when the guru becomes the most important figure for the learned ones, taking the emotional place of the student’s True Love (while not actually being that person or realizing the full implications, which leads to many spiritual circles simultaneously discrediting and mystifying the concept). Church organization reflects this hierarchical structure. Similarly, the art student begins to express the style, preferences and concerns of the tutor and this is considered normal, just as is constant sexual harassment in schools; while the real Muse (True Love) is pushed back and never credited with inspiration or with the teaching of professional discipline that comes from inside. Do we wonder, then, that many artists seem haunted or unable to reconcile with life? Do not blame the Muse for that…

I am very happy I went on this journey, and now I shall be working to reverse this situation as much as I can. I love Art, and I think artists should express their love, not traditions… but let me start from the beginning, and look at the best discoveries I made in Galaţi:

The gallery displays modern works downstairs, while upstairs is the place for art belonging to the 19th century with its combo of portraits, still life and landscapes. Works by local artists are carefully selected to show the evolution of artists’ concerns over time. There is a very palpable revolution beginning with the 1960s in that respect — this, and many other aspects, could be easily grasped even by a minimally interested visitor. I felt instant relief as this particular gallery was doing such a great job in bringing back my sense of why art exists. I congratulated the staff on my way out for the amazing selection, and they explained that most of the staff are practising artists themselves, who are listed in the gallery promotional material. “It shows,” I stated repeatedly.

Întruchipări from Paula Ribariu (above) gives the tone for the modern section of the gallery. The word means something between “incarnations” and “imaginings” – so in that sense it would apply to all works on display. The geometrical patterns represent the common ancestry Romanians share with several Middle-Eastern as well as Native American tribes, and for this reason one is nudged to look at the spiritual implications of the act of making art. In Romanian, ‘întruchipare’ has the underscore of “a complete incarnation of an idea” – for artists this would represent their personal Muse, the Magnum Opus to whose incarnation they dedicate their life. 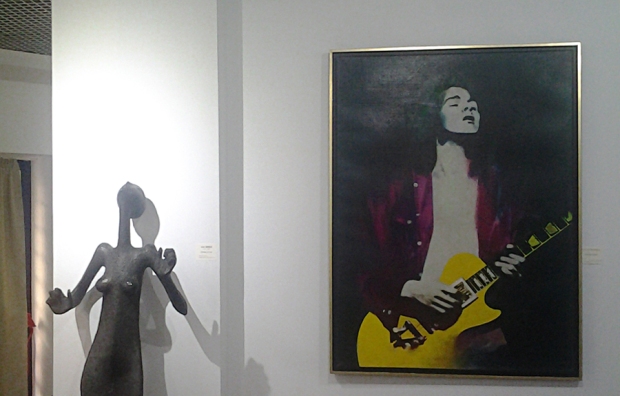 Looking at the guitarist’s ecstatic countenance whose soul had been thus captured as photographic-like evidence of itself, I was reminded of a similar portrait I had seen in Salzburg earlier this year: Vivian Greven’s painting of Bernini’s Ecstasy of Mother Theresa — both show the human’s connection with their respective angelic lover, whose invocation through art or prayer transcends the material world. Being in contact with this stimulus creates what is known as the paradox of the Sphinx: while ascetic on the outside, or simply “married to their art” to the detriment of other relationships, a sensitive human can be said to be “in a relationship” with their angel – and then through acceptance, they perceptibly exude that mysterious calm seen in the enlightened ones. 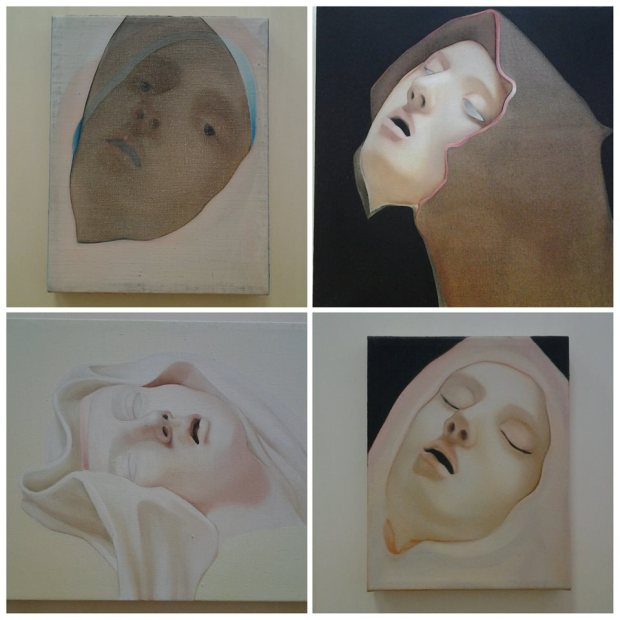 There was another work I found intriguing: by Valentin Popa, a metal engraving called The Last Transport: Take-Off (1971). It shows a group of people escaping from Earth in an airplane; between the airplane and the Earth (Sea) there is a ladder which is now broken in two, and the airplane’s tail section is the Tower of Babel. The drama of the separation (people falling between the now divided spaces, scrambling to get to safety, reaching for their loved ones or accepting their fate to remain Earth-bound) is very unusual in Romanian art because it doesn’t seem underscored by the accepted religious belief… it just looks like the mess it probably was when the mythical primordial world was disrupted by catastrophic events. Such events remain in the collective consciousness, which makes these individual artworks all the more fascinating for originally appearing like the artist had “invented” everything (as in Fantasy). Most notably the Tower appears here as a crucial part of the vessel lifting people up from the disaster, rather than causing the latter…

The Botanical Garden in the Science Complex of Galaţi is a pioneer in Romania with its special sensory garden (hearing, smell, taste, touch) including an acupressure path for the public’s enjoyment. The first time I experienced an acupressure path was in Japan, I was only 14 years old and the stress of managing so many new experiences at once sort of eclipsed any particular sensations received from walking around the path of differently sized stones and logs (it went round a floral clock by the seaside). This time, however, I was thoroughly focused on the present moment, so I’m happy to say the acupressure worked! I could feel every kind of goodness flowing through me from head to toe; and even though it was mid-afternoon on a very hot day, my rate of dehydration slowed down, overall leaving me very relaxed and balanced. These acupressure paths should be installed in every public garden out there… especially since Galatians seem to have found some very inexpensive materials to use: 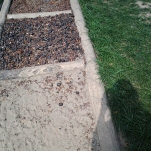 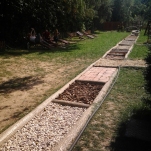 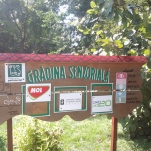 I mention this because it’s fun to create in general, and because the art of gardens is something I studied. However, the feeling described above accurately mirrors a visit from your True Love, so the experience doesn’t have to be about gardens or anything else in particular.

There was a political satire show many years ago, which had a section called The Monument of Unknown Meaning – two guys played the roles of a fictional artist and a reporter trying to figure out what the artist had intended with each monument selected for the episode. The script deliberately used an excess of unintelligible words typical of critical literature, to comical effect. I’m sure they would’ve had a field day here… The selection below was controversial back in the day, but I really liked this place. It has a faint echo of optimistic views of progress. And are those ancient burial mounds on the other side of the river? I am still to find out. 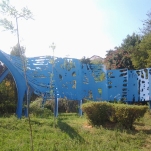 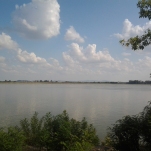 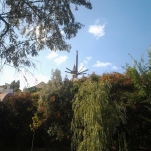 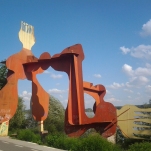 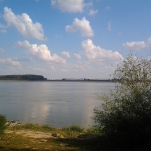 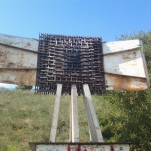 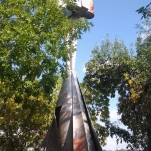 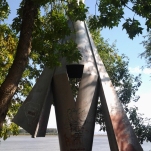 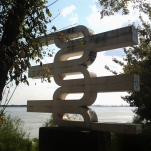 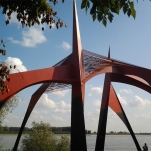 I never know what I will find walking around a city, but I like to record the small ways in which locals try to make it a nicer place to be.  There is also the humour involved in reading aloud official-sounding things like “Harbour Master’s Office,” or surprisingly Jungian shop windows that somehow always tell a private story through their random object arrangement. Speaking of which, I approach all my travels in a somewhat-Jungian key (Native Americans had it for longer), linking private myths with public dreams through chance discoveries. Is the Angel at the ferry-crossing searching for her brave human? And why is “Disco 2000” photobombing so cheekily behind the old-world Axis?…

I hope you’ve enjoyed taking this virtual walk with me through Galaţi, Romania. 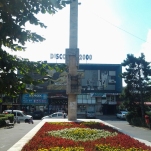